The 9-year old prostitute from Epworth: What no one is talking about. 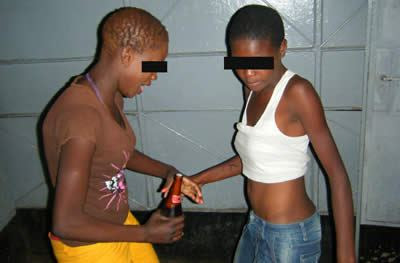 Zimbabwe's cyberspace, at home and abroad, was on fire last week after an interview with a 9-year old prostitute in Epworth, a deprived- even before the socio-economic meltdown of the past two decades- suburb of Harare was aired on Star FM. There was outrage that a girl so young could be caught up in such a situation. Outrage that there are men sick enough to go down to Epworth in their luxury 4x4s to buy sex from a 9-year old for $1. Outrage that journalists, with a sensitivity that is to be expected of an incorrigibly patriarchal and misogynistic society, referred to the girl as a prostitute- she is a Child Victim of Sexual Abuse or something politically correct like that. There was outrage all around.

Except, of course, at where I think there really ought to have been outrage.

The oldest profession in the world

The Epworth Girl is not the first under-age female to engage in prostitution in Zimbabwe. Here in the UK, I met a Zimbabwean lady now in her late 30s who confessed that she was turning tricks at the age of 9. They were desperately poor, and, pending the discovery of at least one pederast with money to indulge his urges, she was the only member of the family who could do that kind of work. I didn't ask where the mother was. Was this ex-prostitute (she did not call herself anything but) ashamed of her past? Maybe, but she told the story as a "the way it was then," and I refrained from judging her. I knew an 11 year-old hooker (No, not "knew" the way Adam knew Eve and she conceived!) too. I once saw a man hand money over to a girl in primary school uniform. And all of this was before things went into meltdown in Zimbabwe.

Child prostitution exists in the UK where I now live on a far larger scale than in Zimbabwe and involving some really rich and powerful people. Pretty Baby, the 1978 movie that established Brooke Shields' career, in which she plays a 12-year old prostitute. In fact child prostitution exists all over the world. I am not in any way endorsing it. Just stating a fact.

What should we be outraged about?

I don't want to take away anything from all the social media pundits, politicians, journalists and other people who highlighted the plight of this poor 9-year old girl. I applaud the actions taken by organisations such as Katswe Sisterhood, which have seen more than 50 such girls rescued from Epworth. However, I still feel that a lot more can be done if we strike at the very heart of the situation that makes it possible for 9 year old girls to function as prostitutes and for sexual predators to have access to them. Organisations, the police etc all have a part to play. But here is the catch- they only have a part to play if there is actually a problem to solve. And, more importantly, they need an awful lot of resources to accomplish this or at least try to accomplish this. This just means more budgetary allocations, more taxes and more aid from the international (i.e. the US, Canada, Australia, New Zealand and the E.U.), resources which could be used in other areas and which are subject to the vagaries of both international and domestic politics.

Speaking of politics, there are many voices which pinned all blame on the failed policies of the regime of dictator Robert Mugabe. Don't get me wrong, my loathing of Mugabe and his evil regime is as intense as ever, but I do not think it is enough to drive 9 year old girls into prostitution. You only have to look at the condition of the 9-year old Black girl (or a White one, for that matter) living under the colonial White settler regime of Rhodesia. Life was hard for Black people, characterised by violence, upheaval and displacement. Yet, we did not have a lot of 9 year-old prostitutes. What changed?

My answer is: the family.

Throughout the ages, strong Zimbabwean families, whatever their socio-economic conditions, have protected their 9-year old daughters from sex predators. As someone who grew up and came of age in Zimbabwe, I know how it was and how it still is in most of the country. No man can simply come up to a young girl without someone, a relative or even just the old lady selling tomatoes at a stall across the street, coming up and demanding that he state his intentions. I once saw a man get roughed up by members of the public in downtown Harare after the girl he was trying to bundle into a car screamed that she did not know him. By the time the police got there, his face was covered in blood and they literally saved his life. That is how strongly Zimbabweans feel about sex predators.

I contend that it is the break-up of the family that is creating a conducive environment for young girls to fall prey to sex predators, and to resort to prostitution. One only needs to compare the biographies of the young girls who have been interviewed over the years: an absent father, no extended family to speak of, raised by a grandmother until she passed away. Take for instance the story of Sarah. She left her village in Honde Valley after her only family, her grandmother, died. She can't go back because there is no one there. Or the story of Wadzanai, who parted with her only relative, her sister, after falling pregnant while still at school. Or Chido, born of a blind beggar; father unknown.

There was a time, and it still widely happens, when next-of-kin assumed responsibility a deceased sibling's children. Sometimes, they were shared among surviving siblings. It was not always a perfect system. Sometimes relatives were more willing to look after orphans if their parents had left them some wealth. Sometimes the spouse of a surviving sibling might not like the arrangement and resent the presence of the orphaned, leading to incidents of child abuse. This has been visited in several novels, TV shows, songs etc. However, at the turn of the century, Zimbabwean society began to see a rise in orphans who had no one at all to take them in as virtually all their uncles and aunts would have also died (usually of AIDS-related illnesses), leaving just a grandmother to shoulder the burden. We also began to see a rise in the number of teenage mothers, cut off from their families after falling pregnant, who eventually succumb to AIDS, leaving young children who have no contact with other relatives. According to experts, Zimbabwe has the largest number of orphans in proportion to the rest of the population. Usually, the oldest of a family of such orphans assumes the role of family-head, which is why they are called Child-Headed Households or CHHs in academic parlance. Read the story of Musa. Read a whole study on CHHs. Such a child has to resort to whatever work they can find. Child labour is illegal in Zimbabwe, but what are you gonna do? So is prostitution, but, again, what are you gonna do? Which takes us back to my earlier point that mobilising government and NGOs will not solve the problem that we are facing.

What will is a return to families. Families that guard young girls from predators. Families that take on orphans. Families that cost the taxpayer nothing and do not need a huge bureaucracy. Families that are known to do better than institutions in raising well-grounded children who go on to lead productive, happy lives.

We should be outraged that we have allowed to die an institution that enabled us to survive nearly a century of colonialism, and can buoy us as we navigate the stormy waters of Zimbabwe's current political and consequent socio-economic challenges. Yet, almost none of the voices heard condemning that a girl of 9 should live the life of a prostitute made mention of the role of the family.

Posted by Masimba Musodza at 4:04 pm No comments:

Masimba Musodza
Born and bred in Great Zimbabwe, of the Buja ethnic group. I know it doesn't sound like it when I speak in Shona, but I am as mhanduwe as they come!! Writer by profession, mostly for film and TV. Have been a devout Rastafarian for most of my life- which is not easy in a country like Zimbabwe. Just as well I now live in Hemlington, Middlesbrough, North-East Yorkshire, England.

In the Name of the Deity Emperor Haile Selassie I

I will make a man more precious than fine gold; even a man than the golden wedge of Zimbabwe-Yeshayehu 13:12